This is a reposting of a little adventure I once had on one of my canoe trips quite a few years ago. Was an exciting day...

I like to go on unplanned, laid back canoe trips.
It's a pleasant pastime, a way to refill my soul when it starts to get empty.

Sometimes I will take a Greyhound bus to a location with my inflatable canoe, tent and a bit of camping stuff. It all fits in a duffle bag I carry on my back. When I get to my planned location, I inflate my canoe, throw my junk into it and pop into a river. Days later I'll pop out again in some town and 'hound' my way or hitchhike back home.

Last fall I was doing a 7 day trip from Rocky Mountain House to Edmonton.
Nice thing about this trip is when I finally land, it's only about 5 or 6 kilometers to my house from the North Sask. river, an easy jaunt home.


I camped the second night on a long rocky sandbar that I like to find with lots of drift wood for a nice campfire that evening. Had a good night.

I woke up the next morning around 6 or 7:00 and climbed out of my little tent to greet the day.
But this morning was different than usual...

Upriver of the island's rocky waterline, about 200 or 300 feet away was a great big black bear. He was doing what bears do, sniffing around and pulling on the odd branch and rock close by the water.
I thought he obviously saw me standing there looking at him but for the time being acted like he didn't care and continued investigating the ground and things around him.

He was BIG and FAT. Had a good summer eating berries I think.

My heart raced. I looked around my small campsite.
First thing I did was grab my little hachet that I keep close by at all times. It suddenly looked tiny and insignificant in my hand as I glanced at it and then back at the bear.

My canoe was by the river's edge, pulled up on the rocks, about 15 feet away.
My tent was sitting behind me, on a little grassy mound.
My coffee perculator and a small clothes line with drying Tshirt, a pair of socks and a towel were catching morning light. I had a little bit of other stuff laying around.

I looked back at my new buddy then over to my canoe.

I thought I could easily jump into it right now, paddle hard, and get out of there but I hated the thought of leaving my gear. It's not alot of stuff and certainly not the fanciest or best quality but I didn't really relish the thought of having to leave it behind. I still had about 4 or 5 days left in my trip and didn't like the idea of having no gear at all to camp with for the remainder. Plus, how was I to survive without coffee?

I quickly thought it may be possible to temporarily abandon camp, paddle away, land downstream a ways and later walk back to retrieve stuff that may not get trashed by my buddy in the meantime. But this area was not 'shore friendly' and dragging a canoe back upstream to use to get to the island seemed like a big undertaking as I quickly thought it through. And where would that bear be hanging out later? hmmmm...

I looked at the bear.

He didn't seem interested in me. I watched him for a few seconds more and he just picked away at the rocks and sticks and stayed where he was. Then suddenly, just then, he sat back on his haunches kind of like how a dog sits and looked this way and that. To me, I guess looking that way he didn't seem as intimidating anymore. 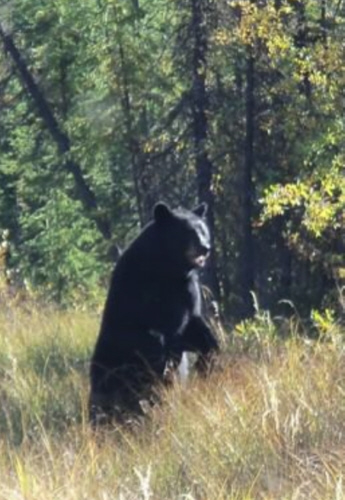 I needed to make a decision. I decided to chance it and try to scoop up my camp and move on before he might decide to come closer.

I shoved my hachet under my armpit and held it against my body.
I know --- not much of a weapon against such a big animal --- but it's all I had. I don't travel with guns.

I pulled the two rods from my little dome tent quickly and bunched it with the rods and everything else still inside it into a bundle and threw it into the bow of my canoe. Then I quickly scooped up the remaining things I had scattered about and threw them into my canoe too, so thankful I travel light.

All the while I kept glancing at the bear and was glad to see he remained sitting there, kind of watching me --- probably enjoying my panic, I thought.

When I had everything in the canoe (certainly not near nice and tidy but in a random, tangled, messy bunch), I pushed out into the North Sask. river and jumped in.

Hold on...! Damn, I had forgotten my fishing rod!

For a second there, I considered just leaving it behind but it's an 'old school' one that they don't make anymore and so very smooth and nice to use so I sucked up the courage, hopped back into the water, tugged the canoe back to the shore with me, let it slowly drift there while I ran over to my rod by the shore, grabbed it, then got back to my canoe. I pushed out again, jumped in and then paddled into the center of the river.

During all this moving around I tried not to run. Yeah sure, I walked and skipped along very quickly but I thought I didn't want the bear to think I was too panicked?
I kept thinking, "animals smell panic don't they?"

So that was that.


I paddled hard and very soon was out far, in the deeper water (well it was about 6 or 7 feet deep there anyway, but the river was nice and wide). I felt o.k., I felt safe.

I kept watching him as I drifted away. He soon got up and sauntered over to my camp and was sniffing around. I think he even seemed to stop every once in a while and I think looked downstream at me. It felt to me like he had patiently waited for me to get my stuff done before he decided to check things out. Maybe he was a bit leery of me too? I don't know...

I didn't like the condition of the camp I had left. I like to camp and then try to leave the site and firepit looking like no one was there when I finally leave.
I would have fluffed the flattened grass under my tent back up, best I could.
I would have scattered the firepit ashes and thrown the unburnt pieces of wood into the river to drift away.
Oh well, no time for that this time.

So one of my last images was of this big, fat black bear with his right paw right in the middle of my cold firepit. He was sniffing everything, probably smelling 'human' there, then the air around him, then by the pit again, and then, at least I thought, he'd look up at me fading away down the river. Behind the log was the flattened circle of grass where my tent had been; a great big 'human footprint'. I hate that.

And the river, this particular morning was chilly and covered with swirling ghosts of steam and mist. Surreal looking. So I was looking at everything with this scene around me. Quite a cool moment for me.

I miss that bear. Now and again I think about him. He even seemed lonely to me.
Yeah, I know, I'm sure he probably wasn't and would have seemed a bit different than that if I had tried to approach him to shake a paw. Bears are scary, cool animals.

Good fences make good neighbors --- out in the bush, sometimes good distance does the same.

(p.s. I have another bear adventure but it all happened so very quickly and ended up, in my opinion, quite undignified for me --as in 'scared out of my bird!'-- maybe I'll write about it sometime, later)...