This little blurb might feel nihilistic but it's not meant to be. It's just thoughts during a cold, dark, winter night...

Due to our genetic, biological, evolutionary lineage, we are all born with innate characteristics and tendencies. Our hair color and style, for example, can be deduced. Our affiliation towards one thing or other can be predicted. Our appearance and even mental capacities are largely inherited from those who pepper our enormous gene pool. These things are given to us from a staggering, exponential ancestral heritage before us. And, generally, we tend to think this is significant in some way. We like to entertain the fact that our particular traits are ‘unique’ or ‘special’. It’s all warm and fuzzy.

Often it feels like your life is the center of existence. Often it feels like the purpose of all things around you are for your personal use and consumption. You start to believe you have a value in the scheme. You really believe your life makes a difference to the world around you and your immediate human society. If you are one of the many who have a close family circle of comfort and support, these feelings cement early and quickly and soon become your foundation.

And like in the world of construction, when the foundation of your existence is laid down early in life, everything else begins to build upon that base in tremendous quantity all the while your body and mind are developing. By the time you are a fully formed adult there is now a huge arrangement of beliefs, attitudes, experience and accumulated 'knowledge' built up on this structure creating a substantial internal belief of being.

The result? We tend to gravitate to this feeling of purpose and some right to exist. It becomes a truth to us.

Yet ironically, almost the entire lineage that produced you, will never know of your existence and you are exactly inconsequential to their lives. Had you eventually been born or not would make absolutely no difference to them. Yet, if even one of them had not been born, you probably wouldn’t exist at all. Absolutely not. At least not the ‘you’ that you believe or think you are.

For instance, I’ve often wondered if exchanging one male, in my own personal lineage, going way back in time thousands of years ago, with his buddy or some neighbor but then keeping the entire lineage the same as it has been other than this one change would affect my eventual existence or if the tampering is so minute that the difference to me would be inconsequential. Would that drop of difference in the gene pool be too diluted to affect outcomes years later or would it mean that “I” would never exist at all and that some ‘other human’ would be in my place now?

That naturally leads me to thoughts of the incredible chance of existence. It leads me to thinking just how improbable being born is, in spite of the fact that we are here now for however long that might be and experiencing life.

How very random and flukey that:

We ARE here.
We ARE alive.

This fact alone tends to give all human beings an impression that their existence has purpose, importance and significance. It’s the underlying reason that we think we matter.

But to me it all seems a bit strange...

In reality, the existence I’ve experienced on our little blue marble so far is that my ‘luck’ has never been that fantastic ever again. At birth I apparently won the ‘life lottery’ and a ‘one-in-billions’ chance of coming into existence at all. Yet now that I’m here, I never seem to win at Bingo, certainly not ever at the 6/49 lotto draw or heck!, not even being able to guess the top card of a deck of 52 -ever-. I don’t have a financial inheritance of wads and wads of money, my social status is only as good as I care to work at, my day to day struggle of life is only similar to the masses who also try to scratch out a reasonable existence on this globe.

Why is that, do you think? Why were the ‘cosmic chances’ so coincidental, accommodating and prominent at the very beginning of our existences but then became instantly illusive for the rest of our lives? Ironic don't you think?

Why was I the ‘winner’, the fastest, luckiest sperm-and-mating-egg-cell in a group of literally billions but when I stand in a crowd of my fellow humans ushering in a New Year’s in the city’s central square, I’m not even close to the prettiest, fastest, strongest, smartest, most fortunate there or even outstanding in any way within that relatively small group of people?

When I was young I chased a flurry of dreams and ambitions, each one yielding its own secrets, successes or failures. But one by one, time and time again, I noticed that life isn’t as great or wondrous as the writers and poets make it out to be but only what it is; surprises are extremely rare, things generally turn out the way you suspect or expect they will. There is usually no fanfare or triumphant 'movie-land' conclusion, no huge cymbal crash or joyful choruses of screams of praise or joy — there's only the quiet passing of time as the Earth makes yet another revolution on its axis whether you notice it or not, whether it matters or not, and things just evolve, happen and conclude.

You'll finally realize that it all doesn’t really matter. And it never has and never will. The only thing I believe to be valid and that we can conclude is at least real, is that each of us is here at all. That’s all. An incredibly, incomprehensibly, nearly improbable chance that we exist at all considering how easy it is to not. Beyond that there isn’t much more to consider. A fluke circumstance.

So what do I take from all this? Not sure — not much. It ain't easy.
I'm of the mindset now that some questions aren't even valid.
They don't even merit consideration — they're meaningless, non-sensical.

All I can do to begin to understand is try to comprehend what that thing is that makes me aware of my spot on Earth?
Why am I not looking out of the eyes of Madonna or a guy named Harry who is a plumber or Bruce Springsteen or billionaire Bill Gates at this instance, somewhere else on Earth, instead of out my own? Or even further, why am I not the mind in the being of Leonardo da Vinci, looking out through those eyes, or that of some Neanderthal hunter in Europe tens of thousands of years ago or in the head of Napoleon or even some lady planting rice in China 2000 years ago? Why do I exist in this particular mind, at this particular location in the Universe, at this particular time, and not some other?

How come I didn't show up as one of these two? (the pigeon I kinda envy actually): 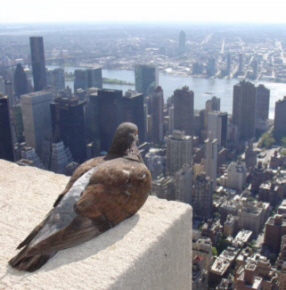 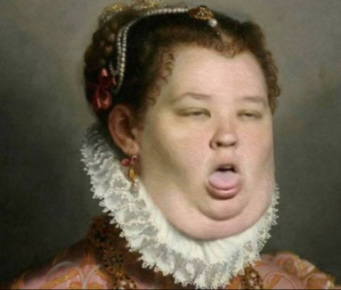 That's where the questions begin and -well- pretty much stop...
Things don’t particularly make sense and logic doesn’t seem to help solve the puzzle much. It’s an enigma.